Vladimír Škoda was born in Prague in 1942. A lathe operator by trade, he later studied the art of drawing and dabbled in painting as well. He moved to France in 1968, where he stopped painting and started sculpting. He studied École des Arts Décoratifs in Grenoble and later with the César atelier at École Nationale Supérieure des Beaux-Arts in Paris. In 1973-1975 he was active in Villa Medici in Rome, creating a series of iron-wire sculptures. In 1975, he created his first works in the forge – a direction that culminated in a series of monumental statues a few years later. In 1979, after his first standalone exhibitions at the Primo Piano gallery in Rome, the BLU gallery in Milan (1975) and the Ilanne gallery in Paris (1977), Vladimír Škoda created his monumental work "Horizontal – Vertical" for the Situation 1 symposium in Regensburg and began showing his art throughout Europe.

After his individual exhibition at Musée d’Art Moderne in Paris in 1987, where he presented a series of forged spheres named de l‘intérieur, his work started to feature the shape of a perfect sphere in 1988 – after long years of smithing practice. In order to process and shape the material, it needs to be heated up in the forge to being white-hot. This substance –energy of steel awakened through heat – prevented Vladimír Škoda from seeing the exact original form of the work being created and the evolution of his work progressed to the form of a sphere. He started setting other metals like copper into the centre of steel spheres and grooving or polishing their surface.

A light-absorbing black dullness transitions to a perfect sphere with shiny surface reflecting a transformed world. Vladimír Škoda created his first spheres with mirror surface in 1991 and introduced them at his individual exhibition in Moulins Albigeois in the commune of Albi in Southern France.

In 1994, Vladimír Škoda became inspired by the movement of a pendulum, and in 1995 presented his first pendulum-themed work named Hommage à Foucault (Homage to Foucault) at the Constellations exhibition in the Rudolfinum Gallery in Prague. The dynamics and technology of pendular movement is best represented by the Kora installation from 1995–1996 where Vladimír Škoda for the first time used a polished concave mirror. In 1999, his work Badria was presented at the Cosmos de romantisme à l’avant-garde exhibition, held at the Musée des Beaux-Arts in Montréal, and in 2004 other pendular sculptures were introduced at the Riflessi celesti e meccaniche galileane exhibition in Pisa, curated by Miroslava Hájek.

Later, Vladimír Škoda found inspiration in vibration and mirror rotation, adding a vision of infinity in motion to the deformed image of the surroundings. An important aspect of this matter is reflected in a series of vibrating revolving mirrors – Miroir du temps (The Mirror of Time) –created since 1999 and finally presented in 2006 at the Sppechio del tempo exhibition in the Italian town of Spoletu and later in 2007 at the Fourth Dimension exhibition at the Trade Fair Palace of the National Gallery Prague.

In 2013, the Espace d’art contemporain André Malraux exhibition in Colmar was the first in a series of exhibitions by Vladimír Škoda in France, Germany and the Czech Republic. The whole series is accompanied by a monograph named de l’intérieur (From the Inside), offering an overview of his work from the 1990s to present day.

Working with metal, Vladimír Škoda uses a variety of processes and techniques and introduces multiple degrees of interactivity through magnetism and polarity. During his career, he held a long-time position of Professor at École nationale Supérieure des beaux-arts in Le Havre and Marseille, and later also at École nationale des Arts Décoratifs in Strassbourg. Vladimír Škoda is represented by the galleries Cermak Eisenkraft, Prague; Jaroslav Krbůšek, Prague; Catherine Issert, Saint Paul; Mathieu, Lyon; Wittenbrink, Munich; Hoffmann, Friedberg. His work is included for example in the collections at Centre Pompidou and Musée d’Art Moderne in Paris, National Gallery in Prague, Central-Bohemian Gallery in Kutná Hora (GASK) or Gemäldegalerie Neue Meister in Dresden, as well as in many public and private collections in France, Belgium, Germany and the Czech Republic. 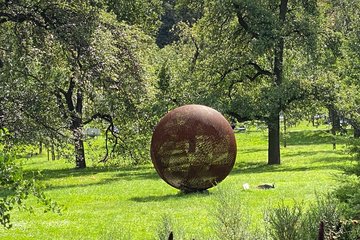