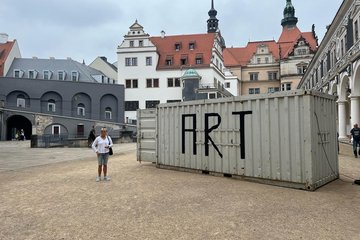 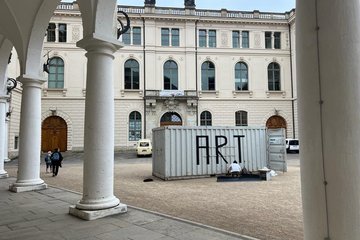 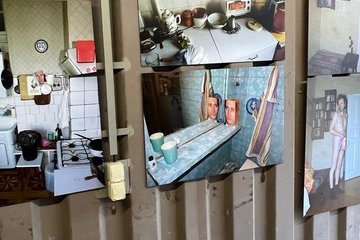 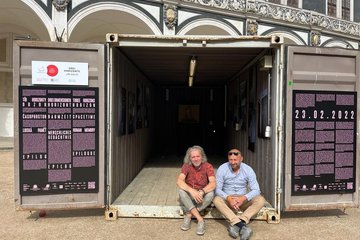 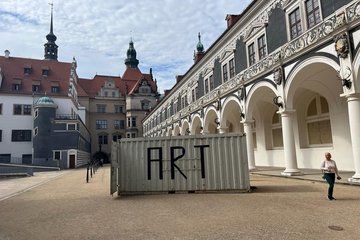 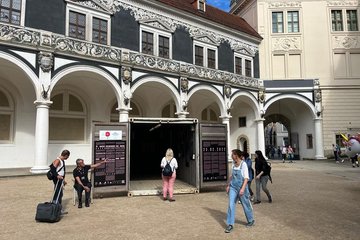 The work of Jiří David shows a clear inclination towards the fragmentarization of the painted surface, the use of symbols, the exploitation of medial, existential, intimate, horrifying, historical, artistic, banal, and vulgar images of the world. At the same time, everything is combined and interconnected, meanings are multiplied, disappear, wander. David’s approach to art grew out of the postmodern discourse, which in its fragmentarization reflected diverse layers of the present. Over the years, his work has diversified into numerous techniques and approaches. Besides paintings and drawings, he also works with photography and creates objects and installations – and more recently, also glass vases. In any medium, the result is almost always a convincing Davidesque aesthetitc that tries to warp or empty established rules of “beauty” while also, in a paradoxical dichotomy, aesthetically reinforcing them.

In 2006 I was invited to the Sakharov Center in Moscow, where I presented large-scale photographs from the Fifth Seal series in a solo exhibition. The Academician Andrei Sakharov Centre has been operating in Moscow since 1994. It specialises in mapping the crimes of communism and includes an extensive archive on political repression, the history of the GULAG labour camps and their victims.

By an extraordinary coincidence, I was staying in Andrei Sakharov's apartment at the time of the opening of the exhibition. In the apartment that became his last home after his return from exile in 1986. The apartment where Russian intellectuals, artists and dissidents gathered until Sakharov's death in 1989. No one else lived in the apartment until then, so everything from the coffee spoons, dishes, clothes in the hall closet, the gramophone record, towels and soap in the bathroom, the kitchen tablecloth, the ashtray on the window and, of course, the books have remained unmoved in time since Elena Bonner, Sakharov's wife, left the apartment.

I spent several days and nights in this unique environment. And then, one evening, my gaze fell on the catalogue I had brought with me and suddenly became aware of its chilling contextual connection to this apartment. It was the 2002 catalogue No Compassion, which included 18 photographs of prominent world politicians of the time crying. I implanted them with my tears. Among them was Vladimir Putin. I couldn't help but take advantage of it, everything was pointing in that direction, and so the weeping Putin began to "wander" in all corners and tucked away corners. He peeked out from behind doors, pillows, lying on the window sill, on the dining table, from the bathroom mirror, and even from the outdated microwave. I couldn't escape it, it attacked my naked body. He was everywhere. Thus a series of photographs were necessarily, inevitably taken, but never exhibited anywhere since then (2006). Only now, after 16 years, on the occasion of the Czech season in Dresden. In a city that is again closely linked to the unfortunate activities of V.Putin, as he was a KGB officer there. It was here, in Dresden, in the second half of the 1980s, that an agent of the Soviet KGB secret service was starting a family, saving for a car and dreaming of a career as an elite spy. The fall of the Berlin Wall changed his situation completely, and on the evening of 5 December 1989 he was still on the phone to the Dresden Red Army garrison demanding that tanks be sent. Shortly before, a crowd of demonstrating East Germans had tried to occupy the KGB building.

In conclusion, I would like to return to Andrei Sakharov's wife. Bonner was the first signatory of the anti-Putin manifesto "Putin must go" published on 10 March 2010 > and continuing in a series of demonstrations.