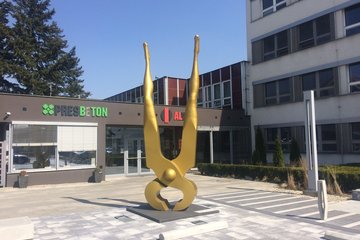 Marc Moser was born in 1968 in Arbon, a swiss industrial town at the lake of constance. In his youth,
he crafted first sculptures, made out of different materials. Influenced by the environment and the profession of his father, an ironmonger, he has developed an affinity for metals. In 1986, after completing intermediate school, Moser decided against an academic career, opting for an apprenticeship as blacksmith instead. Since 1989, he works in his atelier in Arbon. Many of his artworks have received international attention, including the object Sea Pink at the international exhibition Sculpture by the Sea in Aarhus, Denmark, and the object Bluetoo_ at OpenArt, Örebro Sweden, the largest Art Biennale of Scandinavia.

The origin of this artwork is an intuition. The sculpture reveals the polarities caused by a human being and his desire. It illustrates the dilemma and balancing act of conscious existence. Enlarged and modified hand tools interfere with common perception and create symbols for transition from an industrial to digital era. Avarice is a critical review of the greed of our commercial being.