The Gallery of the city Olomouc opened its space to the sculpture exhibition. The choice fell on three guys, two from the legendary Tvrdohlaví: the sculptor Michal Gabriel and Jiří David, who, surprisingly is presenting a new addition to his portfolio of media – glass vases. The trio is rounded out by a significantly younger artist, Jand Dostál. Although the exhibition is firts and foremost about art, also interesting are the technologies used to create all the exhibited works. But visual experience trumps technology any day. Just like all nice experiences, right?

I am a rag-mess, frozen scrunched past cleaning

I am a tag-less block escaping meaning

I am a scruffy hook gruff grid-cage warning

I am a long-lost torn patch drape-adorning

Lost in a first-pass pit without escape

I am a grubby crest shrunk grid post-dragging.

A mix from the visual world of Jiří David. Various series layered one after another in time. Fragmentary narration that highlights meanings and sensitivity, hypersensitivity, a banal exhaustion of the emotions of the world. Postorgasmic depression. Sprays. Cries. We could ask ourselves endless questions. Davidesque spirals, a range of interpretation, original intents, introverted exhaustion, understanding, an itinerary, an exposé. Works of art must be born of necessity. Ambiguity. Death. Desolation. Redundancy. Art is just a black hole. Or a black square? The porous limits of conceptualism. Photography. Performance. Paintings. Assemblage. GLASS. Yes, even glass – glass vases. Goddammit. Despiritualization. Odors combine but do not disappear. Dough. Dust, Dank. Duh. The work of Jiří David (born 28 August 1956 on a leather bench in a waiting room in the north Bohemian town of Rumburk) shows a clear inclination towards the fragmentarization of the painted surface, the use of symbols, the exploitation of medial, existential, intimate, horrifying, historical, artistic, banal, and vulgar images of the world. At the same time, everything is combined and interconnected, meanings are multiplied, disappear, wander. David’s approach to art grew out of the postmodern discourse, which in its fragmentarization reflected diverse layers of the present. Over the years, his work has diversified into numerous techniques and approaches. Besides paintings and drawings, he also works with photography and creates objects and installations – and more recently, also glass vases. In any medium, the result is almost always a convincing Davidesque aesthetic that tries to warp or empty established rules of “beauty” while also, in a paradoxical dichotomy, aesthetically reinforcing them. Despite a highly emotional and aesthetic distaste for glass as an artistic discipline, Jirka arrived at vases thanks to a unique and challenging commission in which he autonomously, freely, and compactly designed part of the interior and exterior of the architecturally remarkable Nezvalova Archa hotel in Olomouc. The task also included a request to create massive glass vases – a more than strange request for an artist who had never worked with glass before. But Jirka delved into the glass tradition with the vehemence of his exciting aesthetic, violating the traditions of artistic glass and producing an entirely different glass “beauty,” here and there shaped using an iron saw to create the Davidesque “sculptures” that he and we are growing accustomed to today.

Jan Dostál (born 6 August 1992 in Olomouc) is a newcomer to the Czech art scene, having graduated just last year from Michal Gabriel’s studio of figure sculpture at Brno University of Technology’s Faculty of Fine Arts. Even so, he has already established his studio at a former military site in his hometown, where he produces ever more crazy and grandiose sculptural creations – forklifts, one the size of a small tank, a homemade crane by the building’s entrance, decorated with one of Dostál’s sculptures… and all sorts of other things I am absolutely incapable of describing. Honza is clearly a fan of iron, which he works with like a paper lover. He cuts it, welds it, piles it up, drops it the ground from on high, and cold twists it. He creates welded sculptural constructions, twisted steles, and geometric or amorphous compositions. He already has his own distinctive style and formal vocabulary. He welds together pieces of sharp-angled iron triangles and sharp-edged metal plates and cubes. Where he previously achieved artistic deformation by (sometimes repeatedly) dropping iron cubes from great heights, today he deforms beautiful polished stainless steel steles by cold twisting them – an approach that he says gives him far greater control. He crosses the boundaries of what, visually and technologically, can be contemporary sculpture. He does not like to repeat. During his first impromptu iron experiments at school, he used metal plates to create figures of animals that certainly caught people’s interest – but it was clear that he had more in him. His mastery of craftsmanship, combined with excellent organizational skills and the intensity with which he approaches his activities, could have easily enticed him to create works bordering on applied and decorative art. He listened to this criticism, said little about it, but already during his studies he launched himself in the direction that he continues to explore today. Honza’s method could perhaps be described as extensive or expressive, amplified by the material (raw as well as processed), sometimes imbued with the popular culture of science-fiction or the subculture of tattoo art – unless, that is, tattoos have not already become a pop cultural phenomenon. And when it comes to watching science fiction series, I don’t know whether Honza even has the time or desire to watch them. Nevertheless, he quite distinctly wears his sculptural vocabulary of form on his body in the form of tattoos. He would probably endow his black station wagon with the same visual pastime, but here he was satisfied with merely sticking black “tattoo” strips on the black finish of his Škoda Superb. If they saw it back at the factory, they’d be speechless. His latest large-format welded sculpture, which he is still working on, will be eleven meters tall. Its form, though possessing light touches of anthropomorphism, remains primarily abstract. It is a work worthy of Star Wars. Nevertheless, as I peruse Honza’s sculptures, I can’t help but see certain affinities with the sculpture of the fifties and sixties, especially British and American sculpture with its achievements in abstraction and its use of raw materials – i.e., the last phase of modern art, which took shape concurrently with brutalist architecture and abstract expressionism. Of course, contemporary painting – and, as we can see, sculpture – is highly gestural as well. And yet, in their grandeur and characteristic visual lightness, Honza’s compositions break the bonds of Earth and achieve an interstellar weightlessness.

One of the dominant works that sculptor Michal Gabriel (born 25 February 1960 in Prague) is showing on the boat comes from his cycle Sharks. These distinctive sculptures made between 2013 and 2016 represent the culmination of Gabriel’s series of predators, which also includes a pack of Beasts of Prey and a flock of Raptors. Taken together, these three groups of works can be seen as a trilogy of earth, air, and water. Predators are members of the animal kingdom before whom man – himself the greatest “predator” on Earth – feels a certain amount of respect. At the same time, however, we admire them for their aesthetic “qualities,” the way they live in harmony with their surroundings, and the mercilessness with which they defend their existence. But besides these “animalistic” qualities, Gabriel is also drawn to their visual representation by a desire to interpret them through the traditional medium of sculpture. With an awareness of the long legacy of sculpture stretching from prehistory and the ancient civilizations all the way to the classical art of the past centuries and the present day, Gabriel is fascinated by the chance of finding ever newer possibilities for traditional sculptural expression capable of preserving the high level of quality of his work while also remaining accessible to the “uninformed” public. Gabriel clearly understands his position as a sculptor as someone whose work should surprise. And so he seeks out ways of shaping the surface of his sculptures, inspired by fractal thinking and the aesthetic demands for the sculptures’ visual perception. By creating abstract surfaces resembling skeletal shells, he (perhaps paradoxically) achieves a greater “realistic” reflection of the viewer… not to mention the animals. In other works, he uses the latest threedimensional reproduction techniques made possible by 3D printers, including the entire process of data formation and the artistic use of this revolutionary technology. He is also fascinated by the creation of sculptures through the traditional casting of real objects and natural materials in bronze. Besides edible and inedible mushrooms, he also did a computer. Another surprising experiment is the construction of sculptures using grids. Using the grids’ transparency, the sculptor naturally violates the full volume of the work – the sculpture thus feels light and intangible while remaining sculpturally voluminous. He is also interested in the use of color, which has in fact been present in sculpture since the time of the ancient Egyptians. Sculptures create stories in our minds. And so sculptures such as In the Bath and The Archangel Gabriel or the other figural, animal, and biological motifs found in Gabriel’s work since the mid-1980s pull us into a wonderfully illusory game that hides and reveals various stories and narratives which are as related to art history as they are to our everyday social and personal reality. From a certain point of view, the ability to bring sculptures together in groups is thus analogous to the universally socializing tendencies of cultural civilization. 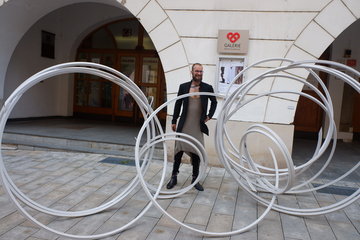