The tragic event, in which 270 men, women and children out of nearly 2,000 Jewish refugees from occupied Europe lost their lives in Haifa harbour in 1940 on the ship Patria (Latin for homeland), will be commemorated by the Memorial of Silence. On Wednesday 25 November, exactly eighty years later, a commemoration of the Patria will take place at Prague's Bubny railway station from 3 pm. The event will be conducted by Hanuš Bor, the son of one of the Patria survivors, in dialogue with the director of the documentary film The Story of the Patria Survivors, Pavel Štingl. The prayer will be delivered by the Chief Rabbi of the province, Karol Sidon.

The program will include a performance by the Trombenik band, whose repertoire will be inspired by the memories of the memorialists in a variety of genres from swing to klezmer. Due to the coronavirus pandemic and the impossibility of mass gatherings, organizers will broadcast the commemoration online on the Memorial of Silence website www.bubny.org and Facebook profile www.facebook.com/PamatnikTicha. A 14-metre high, ship-shaped Wooden Cloud statue will be symbolically transported and placed at the site of the commemoration, Bubny station in Prague's Holešovice district, a day earlier. The author of the work is German sculptor Martin Steinert. The sculpture made of almost two thousand wooden slats weighing a total of one tonne was created by the artist on Smetana Embankment in Prague on the occasion of the Sculpture Line festival this August as part of the residency programme of the Goethe-Institut Prague. The sculpture will remain installed at Bubny station with the permission of the Railway Administration until next summer. The public can view it individually even during the emergency period, as well as the entire outdoor exhibition of the Silence Monument Layers of Memory of the City.

In 1940, the Jews put all their savings into traveling out of the occupied territory - from the Protectorate of Bohemia and Moravia, Slovakia, Austria, Subcarpathian Rus and Poland, they traveled from Vienna on the Danube on crowded cruise liners and across the Mediterranean on ships pulled from the scrap heap. Without a port and almost without hope, they staggered for many weeks through the waters in which the largest refugee wave in modern history is now sailing in the opposite direction. They made it as far as Haifa, where the British colonial administration of what was then Palestine did not accept them and decided to deport them to Madagascar aboard the Patria. To avoid further exile, the refugees blew up the Patria, preventing it from sailing. However, 270 people died in the desperate act. The others took advantage of international law and came ashore in the Holy Land as castaways. Many enlisted in the army, fought in British forces or in General Klapalek's corps at Tobruk, at the Battle of Dunkirk or served as pilots in the RAF.

"The 80th anniversary of the event, when former Czechoslovakians turn up on strange ships without a port, battling sea storms, overcoming seasickness, has many parallels with the present. Weddings and funerals took place on board, someone was born, someone fell in love. There was music of all genres, as the refugees included a small philharmonic orchestra, klezmer players, swing bands, great soloists and actors. And all of this is sailing through the Mediterranean, with the war on everyone's heels. The war had countless episodes that can be recalled over and over again. Few, however, have as many timeless themes as the events associated with the Patria and the Odyssean voyage that preceded them," says Pavel Štingl of the Memorial of Silence.

On the anniversary of the tragedy on the Patria, the Memorial of Silence is offering an educational programme as part of its "From Testimony to Parable" series. In cooperation with Czech Television, pupils and students of second and third grades can individually watch the historical documentary The Story of the Survivors of the Patria. Afterwards, they can discuss with its creators in a conference discussion about working with memories, historical material and the search for contemporary approaches to the great stories of the twentieth century.

The commemoration of Patria is organised by the Memorial of Silence in cooperation with Sculpture Line with the support of the Goethe-Institut Czech Republic, the Embassy of the Federal Republic of Germany in Prague, the Jewish Community of Prague and the Terezín Initiative. 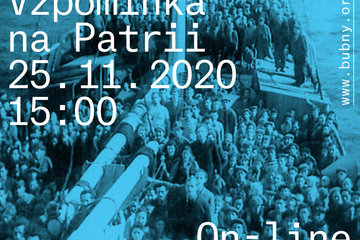