After last year’s first summer exhibition of works by students of art colleges, named Girls, Girls, Girls … representing eight young painters from studios of Jiří Petrbok, Marek Meduna and Josef Bolf at the Academy of Fine Arts in Prague, the second edition of the show has opened in the middle of this covid summer. I was looking for its right name for a while just to stick with the one that seemed the most incorrect to me – after all, I think that the emphasized correctness is largely a hypocrisy and camouflage and that real correctness as well as artistic impulses which can be really called artistic arise somehow in secret, decently, yet all the more real. In addition, I had in mind works by Laura Limbourg who paints girls and herself topless – and with Lucie Králíková she is again part of this summer exhibition. By the way, between last year and this year exhibition, Laura has managed to win the Critics’ Award for Young Painting. And finally, the exhibition takes place upstairs, on the top floor of Černá labuť Gallery where you can go out on the terrace and a terrace is kind of unveiling of the house, a place that leaves itself to the mercies of the sky and air, not unlike young artists revealing themselves in front of sharp and X-ray sights of art lovers and collectors, eager for new experiences and fresh acquisitions. This year, I have reduced the number of exhibitors from eight to six, the spaces of Černá Labuť Gallery are still limited, and in addition to the studios at the Academy of Fine Arts in Prague – Josef Bolf’s attended by Laura Limbourg and Jan Soumar study, and Marek Meduna’s with active Lucie Králíková and the Mongolian painter Batmanlai Narankhuu – there are two artists from Jiří David’s studio at the Academy of Arts, Architecture and Design in Prague: Nikola Lourková and Martina Staňková; taking a glimpse of her date of birth, the latter is in her middle age, but it certainly makes no difference. With these two painters, I also pay a light tribute to Jiří David whose long-term stays at Prague Academy of Fine Arts and the Academy of Arts, Architecture and Design have left a dominant line of graduates and who has been expelled from school like a dog despite his absolutely certain merits.It is not only new artists born in those good school studios – and I assure you that there are also bad ones –, but mainly the mentality of the nascent, new relationships, new procedures, new ideas that take place there. Old phrases are not harped on, but surprising visuals, other strategies, sharpened feelings are built on solid foundations. This time, they range from variously conceived figurations, in some moments with post-realistic smudges or light-hearted lightness, through suggestive narration to abstract tendencies characterized by fragility as well as robustly formed space. Looking at the paintings, I have a certain feeling of strangeness and the same probably have those who create these young paintings. But maybe it is rather astonishment, astonishment of strangeness, conditionally conditioned by uncertainty of the world which concerns us all hidden somewhere in our minds – but to be on the safe side we do not see it, because it is dangerous to turn while we are rushing forward too fast and if we do not watch out we may crash every second with a deadly bump of infinity. Oh, well, art might survive us. Or we may survive art, damn it! Up on the paintings! 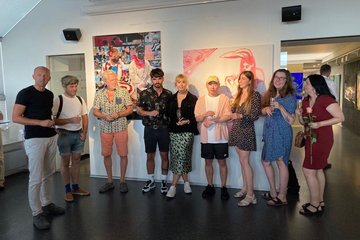