It has already anchored on three continents.

This year, the sculpture festival SCULPTURE LINE will once again connect artists from around the world

Jiří David with his absolute zero in Prague’s Náplavky (Riverside), Alexandra Koláčková’s Two Hands on 17 November Street in Ústí nad Orlicí, Václav Fiala’s Tower for Jan Palach on the Smíchov side of the Vltava Embankment. Nearly ninety installations by fifty leading sculptors from the Czech Republic and abroad are once again attracting visitors to the international festival SCULPTURE LINE. This year, it will begin on 15 June in squares, parks and corners in many cities, towns and villages in the Czech Republic.

But the works from this event also have an international dimension – (Des) Brotamentos by Catiuscia Bordin Dotto can be found by art lovers in Santa Maria, Brazil, and Bridges by Nando Álvarez in the Chinese province of Gansu. From a small festival in a country in the centre of Europe, it has turned into a big event that is beginning to expand almost all over the world.

"Art is a medium where we can meet even in these difficult times. We are currently working with other partners and festival installations around the world. So you can come across artworks in places such as Uruguay or Iran," says Ondřej Škarka, the festival director and art supporter, who is helping to introduce the project in other parts of the world.

On the SCULPTURE LINE art routes in the Czech Republic, people will see works by sculptors Jaroslav Róna, Václav Fiala, Alexandra Koláčková, Stefan Milkov, Kurt Gebauer, Lukáš Rittstein or Jiří David. And there will be not only new artefacts created for this year’s event, but also those that have been making everyday life more pleasant for a long time.

"SCULPTURE LINE is not and has never been after a sensation. We are creating a long-term and socially anchored art project, a solid 'brand'. We have the desire to strengthen our position on the Czech and European art map, to develop the creative potential of the authors and to create a multi-field interaction, but also to give, perhaps paradoxically, the opportunity for other projects in the public space that accentuate other points of view and different criteria," says Martin Dostál, the curator of the originally Czech-only festival.

This year, in addition to Prague, the sculptures, which are intended to make public space more pleasant, are also heading to Dolní Břežany, Ostrava, Plzeň, Liberec, Olomouc, Pardubice, Broumov, Vratislav nad Nisou and newly also to Ústí nad Orlicí or Rýmařov. The festival is also strengthening its cooperation abroad – among others at the Nord Art 2021 show in Germany or in Venice, Italy.

The company Art Lines and its representative Ondřej Škarka are behind the seventh edition of the Czech festival SCULPTURE LINE, which was originally established in the Czech Republic. The company is dedicated to the active support of living authors and contemporary visual art in the fields of painting, sculpture and studio glass.

This year, the festival will again give the opportunity for the creation of site-specific sculptures. For example, Jiří David is planning an object for the Náplavky area called -273.15 °C, i.e. absolute zero, which should inspire reflections on the future and the meaningfulness of art.

A more playful, colourful and cheerful position is represented by the works of Alexandra Koláčková. Her Stele is already delighting passers-by at the Dancing House in Prague and she is preparing Two Hands for Ústí nad Orlicí.

There are powerful stories behind many sculptures and their authors. One such story is connected with the Tower for Jan Palach, which will be located on the Smíchov side of the Vltava Embankment and whose author is Václav Fiala. "I started working on the sculpture on 19 January 2019, at the time of the fiftieth anniversary of Palach’s self-sacrifice. On the radio, the event was remembered from all possible angles, so it was simply impossible to do anything else."

The sculpture then became a key element of the Czech-Slovak exhibition Celebrating 30 Years of Freedom, which commemorated the anniversary of our freedom as part of the Sculpture by the Sea project in Sydney, Australia. It was then taken to the pier in Perth.

The virus didn’t stop the sculptures

Last year, thanks to the Virus Will Not Stop Sculptures challenge, the festival grew significantly beyond the borders of the Czech Republic – to 15 countries on three continents. Among others, Germany, the United Kingdom, Austria, Switzerland, Poland, Luxembourg, Belgium, Italy, Spain, China or Brazil. "Despite the unfavourable circumstances for art, we have managed to expand our cooperation with foreign countries significantly. In Giardini della Marinaressa in Venice, Italy, works by Jaroslav Róna and Stefan Milkov appeared under the banner of SCULPTURE LINE," adds the festival director Škarka.

This year, thanks to the Sculpture Line festival, the largest presentation of Czech sculptors to date will take place at the international contemporary art show NordArt in Büdelsdorf, Germany. It starts on 5 June and will feature, for example, Kurt Gebauer, Stefan Milkov, Jaroslav Róna and Lukáš Rais.

The Sculpture Line festival has proved its contribution to the cultivation of public space during its six-year existence. This was confirmed also during the global coronavirus pandemic. "The complicated situation that we have all been experiencing since last spring has given us the opportunity to look at public space with new eyes. It was suddenly more natural and calm," says Jaroslav Róna, the festival’s artistic guarantor, adding: "Artworks that complement and enrich it have managed to find a greater response. We have managed to create a permanent line of SCULPTURE LINE, which has a strong sound in the Czech Republic."

It honours the genius loci

The SCULPTURE LINE festival was founded seven years ago in the Czech Republic. It connects the sculptor community across the globe through sculptures installed across countries and continents and it is unique in its approach. It aims to expand the cultural and artistic potential of the given location through installations in public space. It wants to bring contemporary art closer to everyone no matter what and to help socialize public space, but it builds on a sensitive understanding of historical context and genius loci. Last year, the festival spread to 15 countries and 41 cities across three continents through 83 installations and 48 leading artists.

The artworks make direct contact with passers-by, influencing their emotions and thus shifting the quality of life for city dwellers and visitors alike. The festival does not only focus on the centres and busy places, but also aims to install works outside the main arterial roads, where they allow to create new visual dominant features and enliven also lesser-known places.

The first edition took place in Prague in 2015 and was initiated by artists themselves, who felt a natural need to take their works out of the more or less sterile environment of the gallery and offer them to a wider audience.

In the past editions of the festival in Prague, for example a five-metre bronze sculpture of a monkey called King Kong Balls by French artist Denis Defrancesco or Jiří David’s key sculpture called REVOLUTION and made from 80 thousand keys, which was installed in the castle park in Mikulov, captured attention.

Attention was also attracted by the Explorers or the giant Octopus floating on the surface of the Vltava River or the installation of the prominent contemporary British sculptor and Turner Prize winner Tony Cragg on the Republic Square. Wooden Cloud by German sculptor Martin Steinert became part of the Memorial of Silence in Prague’s Bubny last year. 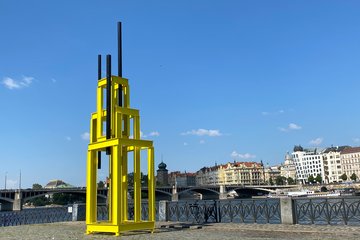