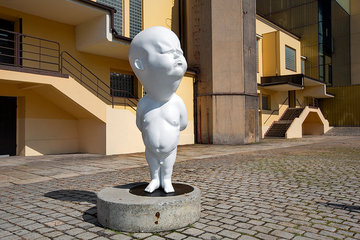 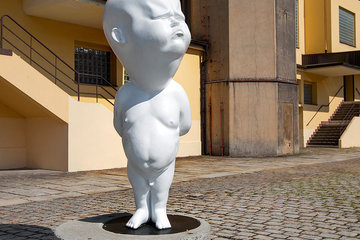 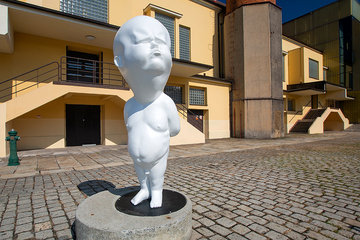 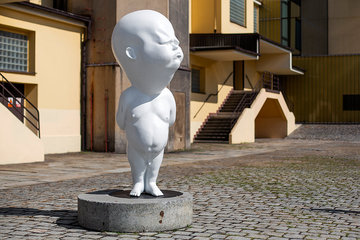 He studied in Bratislava at the Academy of Fine Arts and Design in Bratislava and in Prague at the Academy of Fine Arts where he graduated and received his diploma in 2003. Frešo belongs to the most remarkable figures of the contemporary art after the year 2000 in the region of the former Czechoslovakia. His work and overall approach to art is rather untypical but at the same time they reflect the situation in the society and culture. The artist creates sophisticated concepts and projects presenting them as seemingly simple closed “Pieces of art”. He is often critical in his works and aggressively expresses his contempt of the art scene itself and its processes but with a light, humorous and playful undertone. Recently among other things the author devotes himself to the art of sculpture and painting.

A statuette of a small man with a disproportionate figure and arrogant angry expression on his face. The figure is divided roughly into three-thirds, each of them representing one part of the body - head, torso and legs. Exactly this oversimplified division creates the seeming anatomical mismatch and his huge head at first glance looks ridiculously. This is a brief characteristics of the statue of "Angry boy", which has become very popular among art collectors, art historians, as well as the non-professional public.

It is difficult to describe the whole mix of emotions raised by this statue. The already mentioned arrogance, negativism, inferiority complex, meanness and malicious unhealthy self-importance.