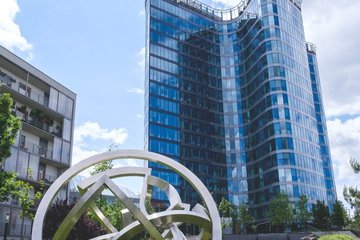 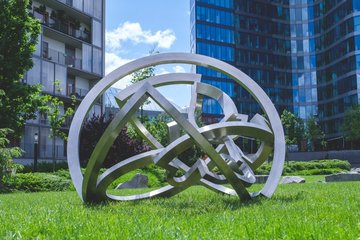 Riccardo Cordero was born in 1942 in Alba in the province of Cuneo (Italy). In 1965 he graduated with honors in sculpture from the Albertina Academy of Fine Arts in Turin. He began his career as a teacher at the Liceo Artistico in Turin. He later held the chair of sculpture at the School of Sculpture at the same academy until 2002. Besides lecturing and teaching, he has always worked as a sculptor with a preference for metal, steel and bronze. From the 1970s onwards, his artistic activity increased nationally and internationally. Noteworthy among his many works are «Disarticolare uncerchio» (Disarticulating a circle) and «Chakra», both of which are exhibited at the Città creative/lavorativa di Cordero in Turin. In 1993, he was asked by the Lookout Foundation in Pennsylvania, USA, to create a large ironwork in the foundation’s sculpture park. Inspired by this experience, he enthusiastically resumed the design of scale works on this return to his homeland. 2005 marked a turning point in his career. He was invited to Guilin in China to create his first work in Corten steel entitled «Comet», which was installed in the Shanghai Sculpture Park. This year (2021), he was one of the winners of the competition launched in Beijing for the 2022 Winter Olympics and was commissioned to create the 17-metre high sculpture entitled «New ET». He is also working on a new version of «Chakra» in Corten steel.

The sculpture, with the explanatory title of E. T., belongs to a recent series of works by Riccardo Cordero where the desire to trace the space where they’re placed as a physical “presence” and not just as a representative one. A nucleus composed of circular elements, cut and incomplete, born from four vertical elements that looks like they are keeping it down, in place, as to prevent its explosion. The apparent instability of the whole creates complex and unexpected visual paths. The eye of the observer is led to follow the curved lines and the short segments unconsciously trying to unravel this bundle of signs where the relation between filled and empty spaces creates an evocative formal complexity. The artist, not by chance, insists on the concepts of the “sculpture as a presence”, that is the activation of simultaneous perceptions that involves the artworks and their surrounding without having one prevailing over the other.