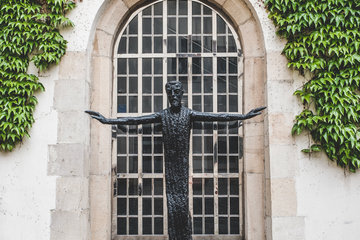 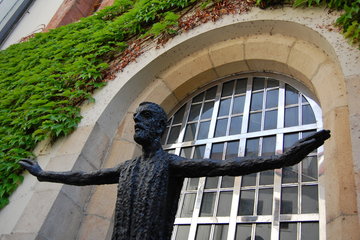 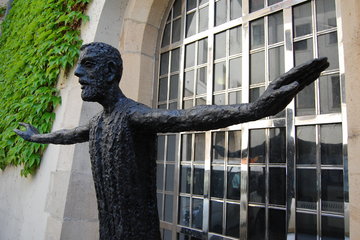 Olbram Zoubek, one of the most important Czech sculptors of the present day, has greatly contributed
to the development of Czech architectural sculpture. He was not admitted to the Academy of Fine Arts
in Prague. Therefore, he completed stone carving practice with the sculptor Otakar Velínský in Prague.
In 1945 – 1952, after successfully passing the entrance exam, he studied at the Academy of Arts, Architecture and Design under prof. Josef Wagner. He became a member of the Czech Union of Fine
Artists, the Trasa (Route) group, the Nová skupina (New Group), he is also a member of the Umělecká
beseda (Artistic Society). Zoubek’s distinctive style is characterized by reduced forming of sculptures,
marked verticality, disturbed surface and the author’s affinity and reaction to the ancient heritage. In January 1969, he created Jan Palach’s death mask. His work is represented in the National Gallery in Prague and in other Prague and non-Prague galleries. The most extensive collection of his works is owned by the City of Litomyšl and exhibited in a permanent exhibition in the Litomyšl Castle vault.

The statue of the Rector was originally exhibited in the public space within the cycle “Olbram Zoubek:
Pedagogové a studenti / Lidé” (Teachers and Students / People) (Ostrava, 2002).