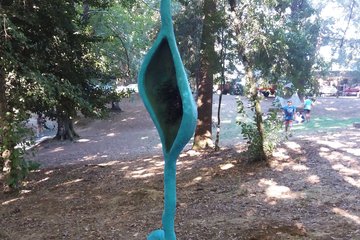 The form that yearns to translate a symbolic feminine seeks its sinuosity in the forms of nature. Sculpture is a body that seeks to anchor itself in space. It embodies its existence by proposing tensions between a colored epidermis with a dark, pointed interior, inviting and limiting, in the same body, the act of touching. Finally, it seeks to integrate itself in this environment for which it was designed: it vibrates with the intensity of its color contrasts with the earthy and dark forest that it inhabits; it wants to be life sprouting at the same time that it intends to integrate itself in the whole and be part of that nature that surrounds it.