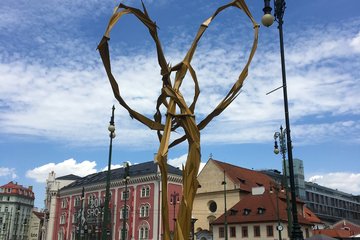 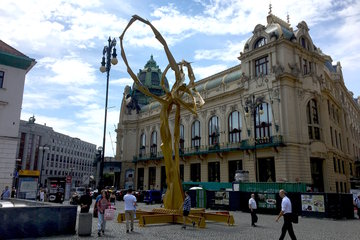 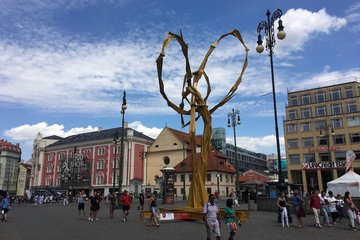 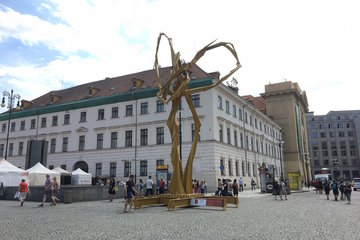 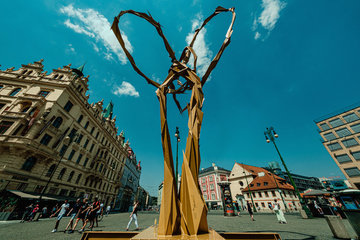 Jan Dostál’s “handwriting“ had been informed by various materials he works with (clay, wood, glass and resin) until he came across steel in which he definitely found himself as an author. This material allows him to work from a small scale up to monumental dimensions. Dostál’s works are made up of small geometric elements (variables) from which he gradually creates his multi-element sculptures that are thematically based on the animal sphere, where the author gradually reduces reality to geometric shapes, or moves at a purely abstract level. The resulting works are not closed on the surface, the author leaves them deliberately open. The openness of the statues enables the viewer to see the interior of the statues.

You must live with the Creature

Sculptures can be made in different ways, but making a big statue is a story in itself. Just one year after graduating from Gabriel's sculpture studio at the Faculty of Fine Arts in Brno, Jan Dostál, a very young sculptor, has embarked on his 12-meter high work, his biggest so far. The motive is the Creature, a figure and non-figure at the same time, assembled and welded from pieces of sharp iron which is the material the sculptor lives with and loves. A model for the Creature has its prototype if we can call the prototype a statue which is two and a half meters tall. According to his own words, Jan is assembling his huge, really huuuuuuuge Creature starting from its feet. The anthropomorphic shape on the border of an abstract expression is distinguished by Dostál’s handwriting, full of sharp strokes and cutting angles. It has its visual background in a contemporary sci-fi world as well as in a tattoo subculture or it is a reflection of late sculptural modernism. The Creature is magnificent and comes to light so that Jan Dostál can reveal his strange, iron, sharp universe, his aesthetics which he lives with and which lives in him as Alien who you certainly cannot get rid of. However, it is also magnificent to weld a splendid sculpture, piece after piece, without an accompanying drawing, according to one’s own imagination, using a sculpture-like crane of one’s own design and production. In this case, art has a chance to enchant and surprise and this is not just by the size of the Creature. Welcome to another world.