Ústí nad Orlicí is a district town in the Podorlicko region in a charming valley at the confluence of the Tichá Orlice and Třebovka rivers. It lies at an altitude of 350 m, 150 km east of Prague. Today, 14 200 inhabitants live here. The origins of the town date back to the second half of the 13th century, when the old Slavic settlement of "Oustí" began to grow during the reign of Přemysl Otakar II. Its beautiful historical centre with an almost regular square square with arcades and typical old houses has been a town conservation area since 1991.

In the past, the vast majority of the inhabitants lived by farming and home weaving. The boom of factory textile and engineering production took place in the middle of the 19th century in connection with the construction of the Olomouc - Prague railway. These factors influenced the life of the town to such an extent that they even earned it the name 'East Bohemian Manchester'. 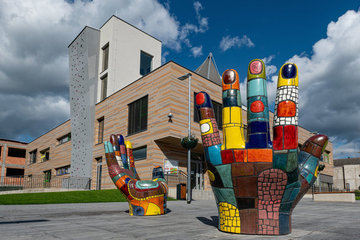 Pieces of art have been commonplace in parks and gardens since anyone can remember. They may be a discreet accessory, an extravagant jewel, a guide or a centrepiece of the garden's design – and the main reason for its existence. An art piece and its placement in the garden can have a deeply personal meaning, or it can be the result of a meticulously focused architectural intent.

The creations of Alexandra Koláčková are immediately recognizable and her style unmistakable. And yet despite this – or maybe precisely because of this – they set the narration line of the area in motion in so many different ways... They serve as a decorative piece or a climbing frame; they can be the centre of the universe or a tiny surprise hiding under the bench... And that is why I personally value Alexandra's work so much.

Most gardens are not meant to be just observed, but rather used in active ways – their space waiting to be touched, sat on, jogged through... Everything is permitted – even welcome. The same applies to Alexandra Koláčková's sculptures. Their simple, rounded and approachable shapes as well as their larger than life size outright beg to be climbed on. This has a tremendous benefit for a garden architect like me. A garden, with everything in it, should be inviting, welcoming and open to visitors – it should encourage exploration and discovery. In case of Alexandra's sculptures, this is often literally the case, with hands or even whole bodies inviting visitors to sit, lie or rest on them. Whatever they want and whatever they can think of, be it children, their parents or their imagination.

Are you interested in some sculptures, would you like to involve your municipality / city in the festival, do you like our idea and want to become a partner of the festival or support us in any way, write to us.