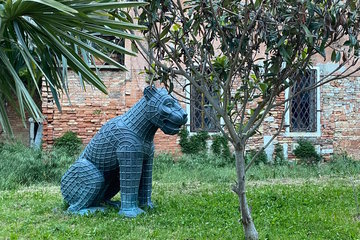 This sculpture has a remarkable story of origin. I was approached by the Prague district of Žižkov (which is very proud of its militant Hussite history) to design a statue for Parukářka hill towering over the district (it used to be an executioner's hill and stood behind the walls of Prague). Across entire Prague, this hill is competed only by one hill, namely the one where Prague Castle stands on.

As is well known, the Czech lands have a two-tailed lion in the coat of arms, just as Venice has a winged lion. During my visit to Vienna, I was thinking about the statue I should design for the hill and on the way to the Belvedere Palace I noticed beautiful baroque statues of lions and sphinxes lining the way up the hill in the park in front of the Viennese Belvedere.

Looking at the Baroque lions, I got an idea to place on Žižkov Hill a lioness that would be a symbolic partner of the Czech Lion placed on the opposite Prague’s Castle hill.

I liked the position of an upright sitting lion, leaning on its front legs, as I saw it in the beautiful stone lions guarding the Venetian Arsenal every year during my visit to the Biennale.

Originally, I intended to create a 5-meter-high lioness, using a technique of beaten copper sheet mounted on an iron-cast prefabricated structure. I wanted Žižkov Hill to gain a new sculptural landmark and attract visitors from all over the world, who visit mainly the central districts of Old Prague. While working on the model, I decided to use a supporting structure for the metal sheet as a supporting decorative element determining the entire artistic expression of the sculpture.

Due to political transfers in the Prague City Hall, this contract was cancelled. I created, however, a 210 cm-high model according to the small model, at least for myself, and I cast it in bronze, because the statue was not so impressive on a small scale.

When I was offered the opportunity to exhibit some statue in Venice, it seemed symbolic to me to that my Lioness would found herself in the city of the Lions that had partially contributed to its creation. 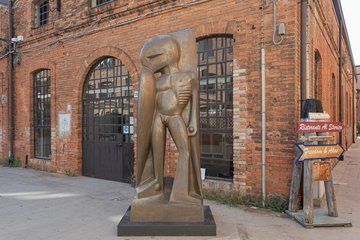 Originally, I created the Guardian as a small-sized sculpture. Its formal qualities later inspired me to recreate it on a monumental scale.

And what can I say about the sculpture itself?

I personally feel that these are troubled times, sometimes even turbulent, and the world is changing in all aspects. Regretfully, it is a change for the worse, as we are witnessing in recent months.

This work is thus an expression of my belief in our civilisation and its power, a symbol of courage and faith in indomitable spirit of humanity – the Guardian and Protector in difficult times.

I am honoured to be able to show my sculpture in the beautiful city of Venice, in a country that had suffered so much this year. I hope that it will bring the viewers a sense of hope in safer future, as it did to me when I was creating it.

Are you interested in some sculptures, would you like to involve your municipality / city in the festival, do you like our idea and want to become a partner of the festival or support us in any way, write to us.